Senate Bill 7 (Block Grant Funding)  was passed by the Kansas House of Representatives on 3/13/15. The document shown below shows the impact to Andover USD 385.
The PowerPoint shown below shows the impact of Senate Bill #7 (Block Grant Funding) for USD #259.
"We Have Everything to Lose", as recently posted on EudoraRocks.org, a blog by Superintendent of Schools Steve Splichal.
"There are few times worse than when you learn that the district you lead — the one you care most about — may likely lose the funding it needs to provide a great education to the students you serve. That time is now."
PLEASE TAKE THE TIME TO READ THE FULL STORY AT THIS LINK:
http://eudorarocks.org/we-have-everything-to-lose/
"Area districts worry about state funding", as posted on The Marysville Advocate website on 2/18/15.
Valley Heights Superintendent, John Bergkamp, explains impact to that district.
Superintendent Richard Flores in the Vermillion district, which includes Frankfort and Centralia, states:
Flores is deeply concerned about a pending bill, Senate Bill 71, in the Legislature that will force more funding cuts in the district if it passes this spring.
“If they do that it’ll be another $47,000 cut immediately,” he said.
USD 113 Prairie Hills Superintendent Todd Evans, explains "Once the district’s five years “lock-down” budget ends this school year, the district will face $580,000 less in state aid."
READ THE FULL ARTICLE AT THIS LINK:
http://www.marysvilleonline.net/articles/2015/02/18/news/doc54e4ed75b8040785361782.txt
"'Something to Think About' from Brent Windsor, Emporia Board of Education", as posted on the Emporia Public Schools website on 2/18/15.
"These decisions will hit Emporia in many ways. Our school district will certainly lose $269,000 and if future payment delays are implemented, as projected, those losses will easily rise to $517,000 or more. ESU will see cuts of $632,000, our civic infrastructure will begin to degrade and Emporians depending on social assistance will find it harder to meet their needs."
READ THE FULL TEXT AT THIS LINK:
http://www.usd253.org/home/news/news-items/something-to-think-about-from-brent-windsor-emporia-board-of-education
"Open letter: Superintendent Eric Reid USD #327", as posted on Facebook on 2/16/15.
"This impacts USD #327 with a mid-year cut of $41,199 from our general fund budget. Mid-year cuts are difficult for schools with most money already committed to contracts and utilities, and it can be challenging to find areas to save money."
READ THE FULL POST AT THIS LINK:
https://www.facebook.com/permalink.php?story_fbid=1087978661228052&id=245309362161657&fref=nf
"Valley Center, Lawrence superintendents take to social media to express budget concerns", as posted on Wichita Business Journal website on 2/11/15.
Immediately, Doll said, the Lawrence district will lose $600,000 from its current-year budget, and he says he doubts that money will be restored in the future.
"Making mid-year cuts is extremely difficult because our budget has already been established and contract and program costs are ongoing," he said. "We must make cuts as we make plans to manage what we're going to do next year."
READ THE FULL ARTICLE AT THIS LINK:
http://www.bizjournals.com/wichita/morning_call/2015/02/valley-center-lawrence-superintendents-take-to.html
"Superintendent gives math lesson on financial outlook for Kansas schools", as posted on Osage County News website on 2/11/15.
"For many, if not most, school districts, last year’s Kansas Supreme Court ruling, as well as the resulting new law, did not increase their revenue; rather, it only reduced their local property taxes."
"Therefore, USD 336’s budget will be reduced by approximately $70,000.00 on March 7, 2015. This will be done through allotments as ordered by the Governor."
READ THE FULL ARTICLE AT THIS LINK:
http://www.osagecountyonline.com/archives/14354
"GUEST COMMENTARY: The Bonner Springs-Edwardsville School District's response to the school budget situation", as posted on The Kansas City Kansan website on 2/11/15, by Dan Brungardt, Superintendent of the Bonner Springs-Edwardsville School District.
The automatic cuts do not require legislative approval and are scheduled to go into effect on March 7th. By instituting this reduction measure, this partially helps to plug a hole in the state's looming budget deficit.  Specifically, it will save the State of Kansas $44.5 million in the current fiscal year.
The cuts were announced after the state missed its January revenue expectations by $47 million.
What does this reduction mean for USD 204?
The actual budget reduction resulting from this cut in the Base State Aid per Pupil for our district will be $143,315 in the current school year.
READ THE FULL ARTICLE AT THIS LINK"
http://www.kckansan.com/2015/02/guest-commentary-bonner-springs.html?utm_source=twitterfeed&utm_medium=twitter
Topeka Superintendent, Dr. Julie Ford explains budget cuts to the district:
http://news.topekapublicschools.net/2015/02/superintendent-dr-julie-ford-on.html 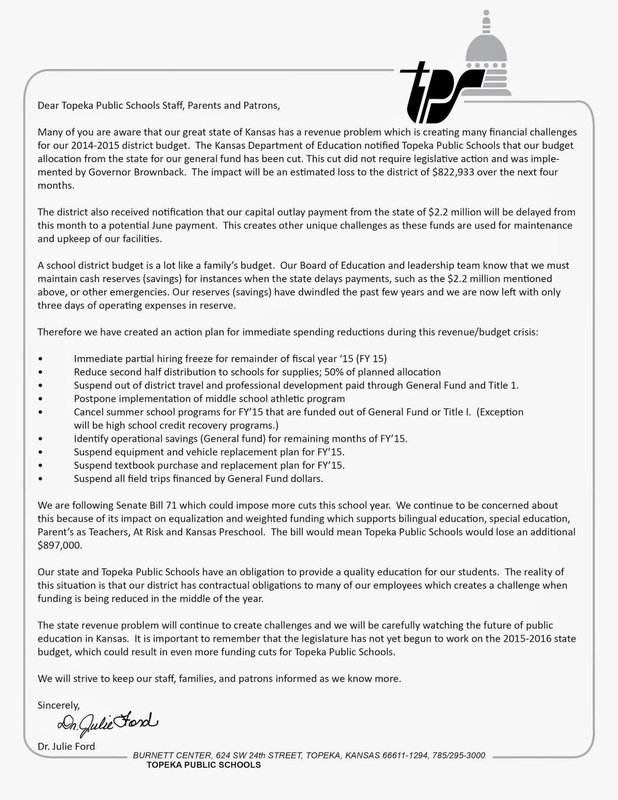 "Less is still less" as posted on USD 373 Business Buzz blog on 2/10/15.
"So, what does this mean for Newton? As mentioned previously, should SB71 be signed into law, USD 373 will receive $191,451 less in LOB equalization aid. The governor's allotments, set to take effect March 7, will reduce our district's general fund by $188,045. The governor has indicated that, should the legislature rewrite the current equalization formula that impacts LOB and Capital Outlay state aid, they could possibly negate the need for the allotment. However, it is also possible - and we feel highly likely - that both reductions will occur during our current fiscal year."
PLEASE READ THE FULL FINANCIAL DISCUSSION AT THIS LINK:
http://usd373businessbuzz.blogspot.com/2015/02/less-is-still-less.html?m=1
"SB 71 effects on Local Option Budget State Aid", as shared on Twitter by Jake Lowen on 2/9/15. 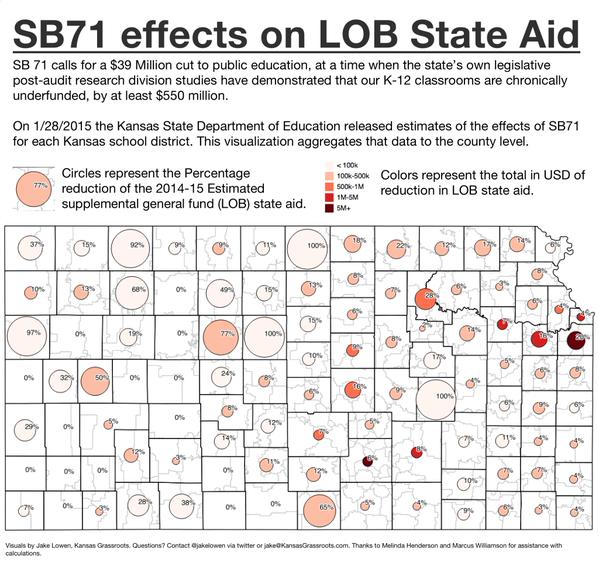