Please let your legislators know that you oppose
legislative changes to the Common Core Standards:
• Andover is in year four of the implementation of these standards which has included extensive professional development, realignment of coursework and costly curriculum purchases.

•The standards were adopted by the Kansas State Board of Education under its constitutional duty to provide general supervision of public schools. Academic standards should be reviewed and revised by the elected state board and not the legislature.

•No Kansas school board has expressed opposition to the content of these standards.

•The Common Core standards set expectations for what students should know and be able to do. The Andover School board locally determines the methods for instruction and curriculum used.

CLICK HERE to read "How The Common Core Became Education's Biggest Bogeyman", by Joy Resmovits, as posted on Huffington Post on January 10, 2014 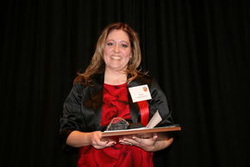 Andover teacher and 2013 Kansas Teacher of the Year, Dyane Smokorowski, testified before the Kansas House of Representatives Education Committee on February 19, 2014, in opposition to House Bill 2621, which would declare Common Core standards for math and English 'null and void' and undo their 'force and effect.' It also would rescind the Next Generation science standards adopted in 2013.
Here is the substance of her testimony: